There was a time when Epiphone used to compete Gibson. Gibson, being the oldest and most influential player in the industry, was still given enough competition to notice their competitor at the very least. Gibson did outplay Epiphone most of the time, but that was not the case every time. Gibson just could not beat Epiphone in some instances. We can take Epiphone’s Casino as an example. In the 1960s, hollow-body guitars received insane attention from the world. They still do, but the 1960s was a better era for the kind of music hollow-body and semi-hollow body guitars. It was then that Epiphone released its Casino. On the other hand, Gibson came forward with Gibson 330. That too, obviously, was hollow-body. Critics since then have put Epiphone’s Casino over Gibson’s 330. And so did the audience. Epiphone Casino had more sales than Gibson 330 and it also had better sound and tone quality. But over the years, Epiphone stopped competing them. Instead, they started making Epiphone versions of Gibson models. They even have a license today apparently. That is also a smart idea, but it is uncertain why Epiphone took that decision. It is a smart idea because making Gibson guitars available in the markets in half the price is basically targeted lower segments with premium products that are a little less in quality than their Gibson versions. 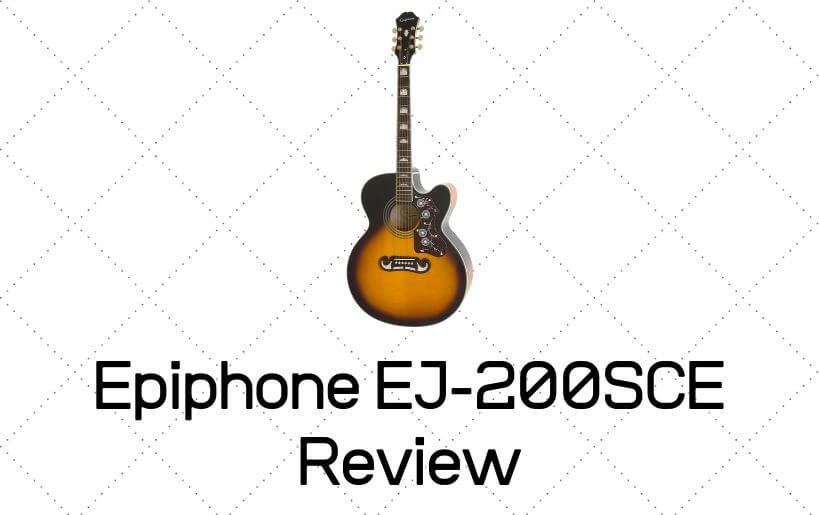 Having said that, EJ-200SCE is one such example. EJ-200SCE also falls in the category of Epiphone versions of Gibson. It was Gibson’s J-200 that Epiphone made a clone of and that is the guitar under discussion here. In complete contrast to Gibson’s version, Epiphone EJ-200SCE costs no way near to 4000 dollars. Yes, that is the price of Gibson’s J-200. Epiphone has put in their best to create the same guitar at a lesser price. It looks the same and it even has a tone very similar to J-200. But, there obviously are some small differences. 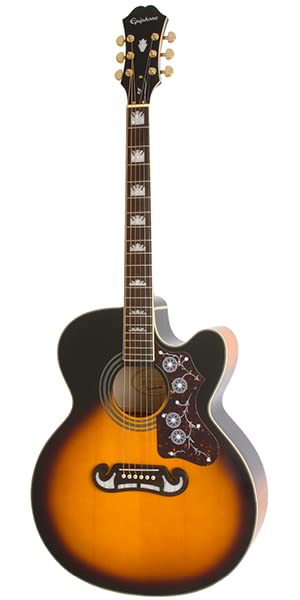 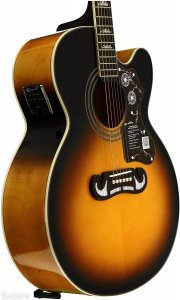 The EJ-200SCE by Epiphone is a great guitar. It is a jumbo-size guitar with a huge body and definitely one of the best instruments Epiphone has ever produced. Design-wise, the Epiphone EJ-200SCE is a little different than Gibson J-200. The latter has two cutaways, while the former has only one cutaway. Some professionals criticize the single-cutaway. In their opinion, if Epiphone was into cloning Gibson products, they should have at least cloned it perfectly. But there is a counter team that argues that if EJ-200SCE had a double-cutaway, the sound it produced would not have been the same. Regardless, the guitar has one cutaway and it still gives full access to the fingerboard.

The guitar is available in multiple colors, sunburst and black are two of them. Some people look down upon it because it was manufactured in Asia. These are the people who do not realize that the acoustic guitar industry today is mostly taken over by acoustic guitars made in Asia, by Asian companies. 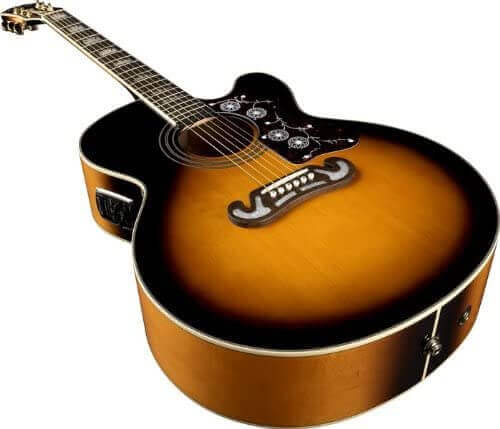 First and foremost, the EJ-200SCE has a jumbo body. It is huge but by shape it is a Dreadnought, like most acoustic guitars under 500. As mentioned earlier, there is only one cutaway in this body. The back and sides of the guitar are made from hard maple and the top is made from Sitka Spruce. Spruce is known to create a sound that is loud and bright, what we essentially know Epiphone for. However, this is not the only quality Spruce has. One interesting fact about this wood is that it gets better with time. The older it is, the better it will sound. So technically, you are not going downhill as time passes by. You are going uphill.

Inside the guitar, the construction of the body is scalloped. Now this further makes sure that the sound it produces is loud and firm. Stability in sound is one important feature guitarists look for. They do not want the sound to disperse or diffuse before they want it too.

The neck of the guitar is made of select maple. It is a D-shaped design that is known as a SlimTaper. The huge jumbo body might indicate that it is a guitar that is hard to play. That is not true. The neck is so curvy, slim, and smooth that your hands perfectly fit the board. The fingerboard, interestingly, is not made of Rosewood. That is interesting because there is rarely a guitar with a fingerboard not made of Rosewood. It has proven to be the most popular and best choice for fingerboards. The fingerboard in EJ-200SCE is made of Pau Ferro. Another brand that uses Pau Ferro instead of Rosewood for fingerboard is Fender. The neck has a two-way adjustable truss rod and the fretboard has 20 frets with Crown inlays.

Epiphone wins the game with the electrics they have used in this model. They took the edge of German engineering and used Shadow’s eSonic2 preamp system with two pickups! On the side, there is an EQ for each pickup. Each EQ has a bass and treble control, volume control, and phase inversion toggle. The tuner along with EQs is a cherry on the top.

For the price Epiphone sells it at, EJ-200SCE is an unbelievably amazing guitar. The sound is huge, the tone is bright with great punch, it has 2 pickups that are controlled by separate EQs, has a tuner, and looks gorgeous in whatever color you choose. This guitar is a brilliant choice for recording studios and concerts both. People use both techniques to record it. As in, some plug it in and some mic it. And it does not fail to impress in any setup. Same is the case with gigs. No matter how you use it, the grandness of its sound and the crispiness of its tone will never leave.