While the Korg SP170 was an excellent product for most of its buyers, the brand decided to launch its variant sooner than anyone thought they would. The reason could probably be that some users were facing difficulties with some features which the new Korg SP170s has managed to overcome. 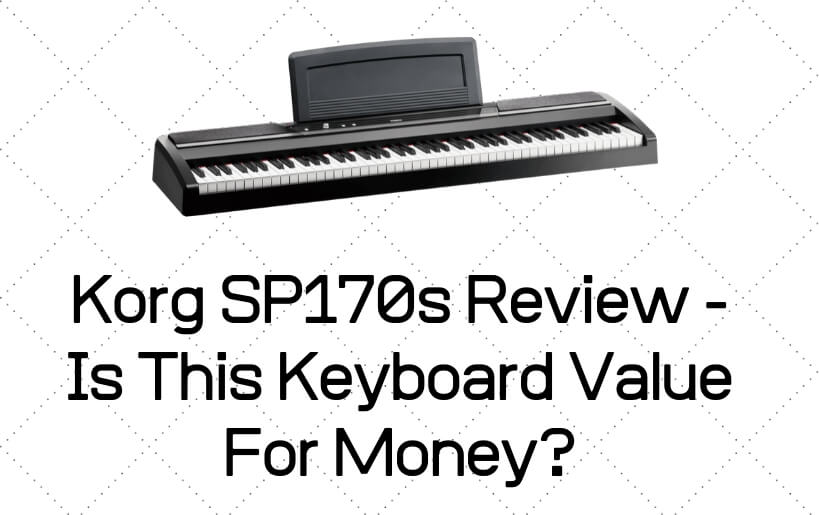 What are these features, and is the new model any better than its predecessor? That’s what we are going to discuss in this Korg SP170s Review article.

While much of Korg SP170 features remain, it is equally important to mention them again for readers are new to both of these variants. After all, there’s always a chance of a complete newbie looking for his first instrument. And there’s also a good chance that you might be one of those readers. So, don’t worry. We will mention and explain every feature.

Aesthetics is very important when it comes to Pianos or any musical instrument for that matter. Therefore, Korg SP170s like its predecessor has a fantastic look and feel about it. It weighs 27 lbs and is 52 inches in length and 12 inches in width. Although there’s not much of a change here, the Korg SP170 had a special edition in red color. That special edition is not available in the new variant.

While the previous model had no buttons on the surface, the latest one has four. This seems like the feature; some users were complaining about. Previously if you wanted to change the tone you were required to press A#7, B7, and C8 keys simultaneously, along with a specified key. This required going through the manual, which for a lot of people is quite frustrating.

Now the Korg SP170s has shifted some of these functions to the recently added buttons which are; a power button, volume knob, new Piano Play, and Sound buttons. While previously you were required to press the three keys, now you only need to press two; the sound and piano button, simultaneously. Although not much of a difference for professionals but this does remove the lack of navigational ease the previous model, Korg SP170 had.

Another noteworthy change is the new Piano play button that takes you back to the default sound. Previously newbies had a tough time doing that.

However, it’s noticeable that much care has been given to keep the interface simple and avoid knobs and sliders that might overwhelm the user.

The sound quality of every tone is as good as that of an acoustic piano, which is something rare in digital pianos. This is something Korg seems to be mastered at than any other brand. This is most advantageous for expert players and beginners alike because this prevents them from feeling unfamiliar with acoustic pianos.

Therefore, if you do find this keyboard lacking in tones as compared to some that have several hundred, do remember those keyboards sacrifice on quality. Moreover, as you advance, if you are not already, you can be creative and make music from sounds ranging from drums to guitars and many more.

However, experts might notice the lack of nuisance in the tones, and that’s where we can deduce that this piano was not built for experts.

Although the Korg SP170s has added features than its predecessor the price has remained the same. This is quite a fascinating offer, given the features are what only high-end keyboards have. Korg could’ve easily asked for more, and we wouldn’t have complained.

Unlike most low-end or midrange keyboards, the SP170s has been equipped with weighted and graded keys. This not only makes transitioning between acoustic and digital much more comfortable but also makes playing different notes easier, especially for amateurs. If you are looking for best digital piano weighted keys, then you should check this article.

Although these are not the best-graded keys but better than most key keyboards of this price range.

The biggest flaw in 170 was the lack of speakers which has now been taken care of in the 170s. It has been equipped with two 10cm by 5cm oval speakers, and overall better resonance and tone by restructuring its different parts. However, there’s still the option for plugging in amplifiers and speakers.

The Korg SP170s is also equipped with a dual headphone jack. Making it ideal for a private student-teacher piano lesson without disturbing anyone around. You can also plug in digital recorders and external amplifiers in these jacks.

Furthermore, the SP170s is also equipped with reverb and chorus effects built-in.

This is the most significant drawback of the Korg SP170s. Korg should have added a display, even if they would’ve charged more for it but they didn’t. Now without a display, you’ll have to carry your notes with you whenever you’re going for your classes or performance.

Now that we have explained all these features, we will outline the pros and cons in the most straightforward manner possible to make things easier for you.

All in all, the effort on the part of the brand is worth appreciating as they have tried to listen to their customers. This is not something common among such big brands.

However, you might feel like Korg SP170s lags in some areas, that’s when you need to understand that this is not for your skill level. The Korg SP170s is one of the best digital pianos for beginners and its worth their money as this will work well for them for over two years. They will not only be able to learn from the start, but they’ll also find transitioning from this digital piano to an acoustic piano fairly easier.

Therefore, if you’re just starting out or in the beginner’s phase, we strongly suggest you buy the Korg SP170s. If you think our Korg SP170s review was on point and helpful, let us know in the comment box below.