There are several brands that compete in the world of guitars. But usually, guitars are sold because of the impulsive attraction of the buyers towards them. They might have seen their favorite guitarist playing the model, or they just love how the guitar looks. In short, the preferences are usually not backed by reasoning, and hence, guitar brands successfully manage to sell models at higher prices. However, with Yamaha, that is certainly not how they have earned their reputation. Yamaha has positioned itself as a brand that provides more value than their instruments’ cost. Instead of crazy branding, Yamaha has always resorted to manufacturing guitars that are extremely high in quality and are still affordable. Not many brands are able to do that. Yamaha was founded in the late 1800s but they started manufacturing guitars in the 1940s. Initially, their models were nylon string classical guitars, just like Ibanez, and sold them inside Japan only. However, in the sixties, the entire world was influenced by the magic of the Beatles. One major consumer behavior shift that this Beatles madness created was an insane increase in the demand for guitars. US manufacturers could not meet the demand, and they could not even target lower SECs because the manufacturing costs in the US were high. Consequently, the US turned to Asian manufacturers for help. They started importing from Asian brands because they were able to provide the same quality at lower prices. This is when Yamaha made its way to the US markets. Since then, they have released numerous series of guitars, and one way or the other, Yamaha has always silently served their customers with the quality that would cost them an arm and a leg otherwise. 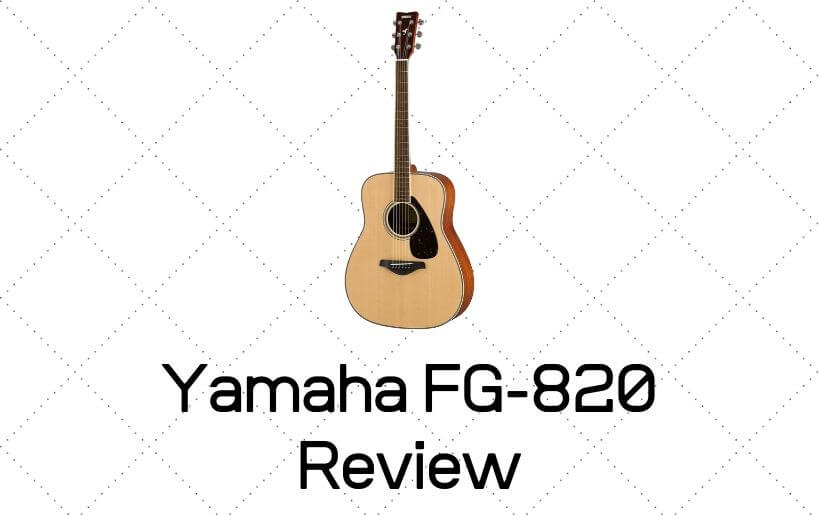 The first series Yamaha started exporting was the G series. Soon after its success, Yamaha released its steel strings series and bass guitars. The first steel string series they exported was the FG series. So, they have been around since the 1960s. Since then, the quality, versatility, and technology of the series have only improved. One guitar from the FG series is the FG820. It is one of the most unique sounding guitars out there and Yamaha has made it so. Let’s dive into the details of FG820 to see what is so different after all.

The FG820 is available in two profiles, concert, and dreadnought. The one under discussion over here is the dreadnought profile. By the looks, FG820 is a classic looking Yamaha guitar. No fancy. It is the standard shape and looks, probably because as mentioned earlier, Yamaha does not sell fancy; they sell functionality. FG820 has a solid Sitka Spruce top, Mahogany sides, back, and neck. The Mahogany, however, is laminated. That is not written anywhere but it clearly appears to be. The fretboard of this guitar, like nearly every other guitar, is made of Rosewood. The hardware is chrome, tuners are die-cast, body binding is crème, and the size is full.

The woods that are used, Sitka Spruce, Mahogany, and Rosewood, are all of extremely high quality. These woods do not wear out anytime soon. It would be safe to say that this guitar would last for ages. In fact, the sound and playing keep getting better with time. Moreover, the guitar also has a gloss finish over woods, which further keeps them safe and increases their life. Two, the crème binding on fingerboard adds some more years to the guitar. It is often assumed that durability and longer life comes only with higher prices. That, evidently, is not true for Yamaha’s FG820.

Sound is the best part of Yamaha’s FG820. The use of woods in the body of this guitar is super smart. The entire body except the top is Mahogany. This gives a beautiful warmth to the sound of this guitar. However, just the warmth is not enough. Therefore, Yamaha used Sitka Spruce for the top. This adds a little brightness to the warm tone. Therefore, the tone of FG820 is impressively balanced. It is warm as needed, and bright as needed too. The dreadnought body is large enough to amplify the sound enough. It sounds dominating and large. Additionally, Yamaha has introduced a new cutting-edge acoustic technology in their FG series. It is called a scalloped bracing pattern, which was developed after years of research by Yamaha’s R&D. Apart from increasing the durability of the top, it does an impressive tweaking to the sound. With a scalloped bracing pattern, the body amplified lows and mids a little more than the highs. This way, the overall sound of the guitar becomes excessively loud and still does not get sharp. That really is a super-smart solution.

Even after a robust, exhaustive search over the internet, you might fail to find any other guitar in the average price range that can beat the value offered by Yamaha FG820. This guitar is a complete package with no compromise, which is usually not how it is when you buy a budgeted guitar. More often than not you will have to compromise on something or the other in a budgeted guitar. It might not sound good, or it might not be that durable. Any guitar that offers both, decent durability and a great sound, would then cost too much. FG820 by Yamaha, however, is an exception. It is usually the first guitar guitarists buy, or on their intermediate stage. But, it stays with them almost forever, even when they become professionals. It is probably because of the unique loud sound it produces and the fact that it improves with time. Nevertheless, considering it might prove to be a lifelong investment, the price point is literally peanuts!

Yamaha FG820 is a complete guitar that is bought in the initial stages of learning and stays with the player forever. The sound and tone quality it offers and the level of durability it has shown is a unique combination that is never really offered at this price. If you are looking for a budgeted guitar that gives you a beautiful large sound, Yamaha FG820 is your option. If you are into blues or country, there is no better-budgeted option than Yamaha FG820. Some people who have played it claim that it can sound even better than a Martin in some cases. A Martin is 4 times as expensive as FG820; or even more.