Are you looking for a high-quality amp for your guitar? You don’t know which amp to use to strengthen some of the weak electric signals given out by various types of guitar? We know that feeling. To boost your guitar’s signal and convert them into solid sounds, we reviewed dozens of guitar amps available. The highly recommended Fender Champion 100 stood up to our expectations.

Fender has been known in the music industry for its top-quality guitars and iconic amps. Not only does Fender pack in a punch when it comes to features and specifications, but they are also known to be value for money and affordable. The Champion series is one of the highly-rated series with an excellent amp while being affordable. 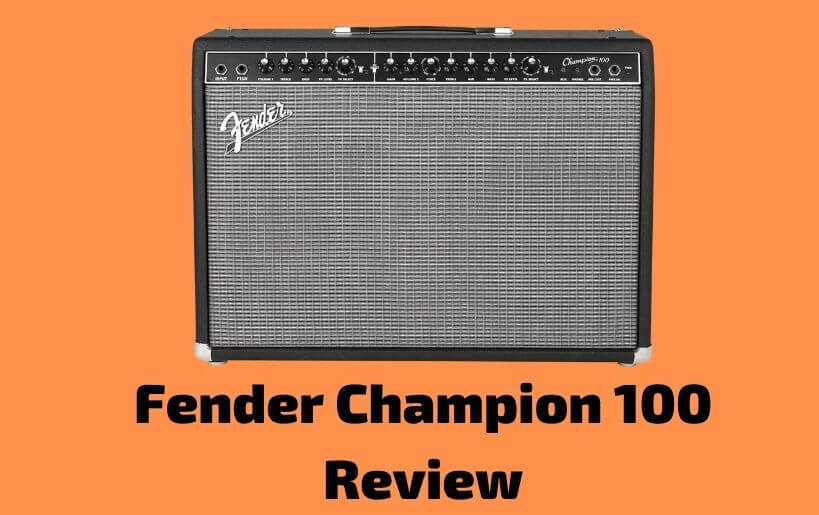 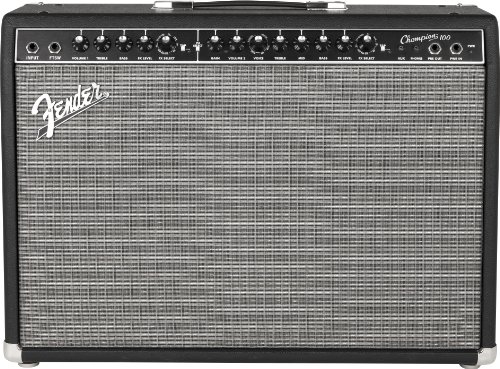 It is a no-nonsense and very straightforward model. This solid-state two-channel modeling amp has a combination that best fits two 12-inch speakers and an auxiliary input that helps to backup tracks. It is capable of playing on mute through earphones and other outlets through the XLR output.

Marriage of classic and modern amps

The advantage of the modeling feature on this guitar amp is it brings together classic and modern amp sounds like the delay, chorus, vibrato and reverb. It also has a dual-channel configuration, a footswitch to assist during live performances, and a 5-year warranty. With its 100W output power and a weight of 40 pounds, this is one of the handiest guitar amps around.

The Fender Champion 100 has a plastic body and is black in color. There is a silver cloth grille in the front. The nickel braces at the edges don’t just add to the looks; they also protect the amplifier from scratches.

The amplifier is 26 by 19 by 10.25 inches in dimensions. It has a 2-12 inch speaker design. The design is encased in a ¾ inch MDF wooden enclosure, which is sturdy and prevents sound distortion. The design of the corners of the enclosure is enhanced with silver and a body of black Tolex. The black vinyl on the sides and top give an ancient vibe. It has a straightforward interface with knobs, buttons, input and output jacks all in a single row.

The USP of Fender Champion 100 is its two-channel system. The first channel has a clean sound akin to the old Fender Blackface amps. The twin reverb is a classic example of it. This channel controls the treble and the bass. It also has an FX Select rotary switch that helps manipulate effects and combinations.

The second channel is responsible for tone-sharing options. It can gain control for driving up the preamp and get the right amount of tube-style distortion. This channel also helps to modulate the treble, bass and mids.

The channels have individual EQ and effects independent of each other. These features help make this guitar amp highly versatile and layered with textures and atmosphere.

This guitar amp even allows for a delay time and a modulation rate. This is achieved by a tap tempo button and the FX knob. As explained earlier, the two control layouts are independent of each other. The clean portion has features like volume, bass, treble, FX level and FX knobs.

The right side has a channel which is the voice selector. The features here are gain, treble, bass, mid, volume, FX knob, FX selector and a voice selector switch. The presence of two FX levels and knobs is why this amp is capable of combination effects. This also has a channel selector in the middle. It enables a single guitar input and no dedicated twin input.

Sigh! The footswitch can not be used

To set the tempo. It is only the FX Level control that can adjust the mixing of the dry and processed signal. It allows for the usage of its pedals though.

The Fender Champion 100 has 16 amplifier-type models that are entirely accurate.  The models include the acoustic flat Jazzmaster, Deluxe and Twin, Deluxe and Bassman, Champ, amongst others. They have sound’s from the 1960s, ’70s, ’80s as well as modern sounds.

Which is loud and purposely designed for Fender by Eminence. The two 12-inch speakers have a 16 ohm sound with a magnet. The magnet is at par with the DSP models and upgradeable. With their attractive ‘in and out design,’ you have everything located on the front panel.

It has an effects loop called the Pwr In and Pre Out. Post the pre-amp gain stage; the pedals are connectible as per requirement. The Pre-out is also a direct output connection. The 1/8-inch aux input is a play along with a media source. The 1/8-inch headphone output is also a boon for those who need solitude.

All of the above-given power is backed by a considerably high quality of output. Every voice, sound and vibration are hummable, unique, fun and clear. The voices and effects are mixed and matched to create the desired output The 3-D band EQ, along with its tonal options, help create its sounds.

The amplifier has a hauntingly timeless charm to its tubular sounds. The amplified sound does shake a bit at a very high octane though, making it fantastic for slight and medium overdrives and leaving it average for metal sounds.

And melodious. What can be improved is the note-to-note definition, which is somewhat lacking. There is plenty of quality in effects. It doesn’t have the feature to save and recall presets, though. The tone controls are highly responsive, responding at the touch of reverb. They are a convincing emulation of tube circuits. But as discussed earlier, this can’t handle high octane. There are models which are overdriven or are clean. The model here has varying degrees of overdriven crunch.

With Jazzmaster, the sounds are clean and flat. When used along with the pedal, they let out a neutral sound with gain and mid control. The reverb effect stands out and has an excellent response and tone.

Overall it has one of the cleanest sounds that we have heard from a guitar amplifier.

After the Fender Champion 100 review, we can conclude that the sound quality, versatility and power of fair sound offered outperforms most other guitar amplifiers at this price range. It may not be the one for heavy-duty musicians, but for beginners, intermediate musicians or a small band practicing, this may just be the perfect equipment.

While there is other equipment available and an XL version of the same is available too, we still believe that this is by far one of the better models you should check out. Not only does this have great sound, but it is also easy to plug and play. The high octane sounds aren’t played well by tube amp, but the cleans are well worth the price.

Is this worth the investment? A resounding yes from our end. It can serve many purposes at once. If you are interested, look no further and buy this.