The conversation about the MXR EVH Phase 90 cannot be said to be complete without a trip down memory lane. Edward van Halen, popularly called Eddie is no stranger to a professional guitar player. When some players arrive on the world stage, they do so like a meteor and Eddie was one of such players.

Armed with a charming smile, a homemade guitar, and a couple of MXR pedals, Eddie hit the world of guitar players like the biggest meteorite since Jimmy Hendricks. The tsunami he created was unbelievable, and players didn’t just want to play like him, they wanted to sound like him. This gave birth to the MXR EVH Phase 90. 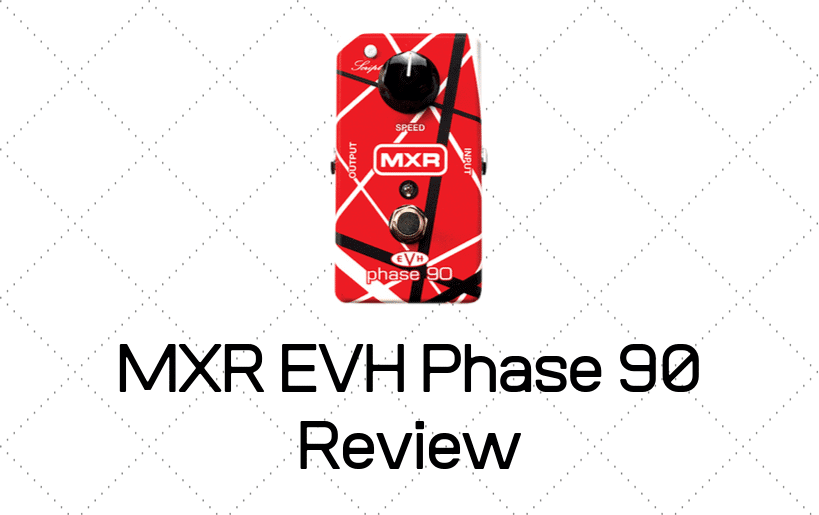 But why Eddie you’d ask. When the MXR 90 was first introduced on the market, it was made popular by Eddie. He was known to have the MXR 90 as a key component of his performances. It is a product of a collaboration between Jim Dunlop, the original creator of the MXR 90 and Eddie van Halen.

The MXR 90 can be regarded as a classic phaser pedal. It is a vintage phaser famous for its sound. It is that unit that will cause you to explore other pedals of its time thanks to its characteristic simplicity and sound. 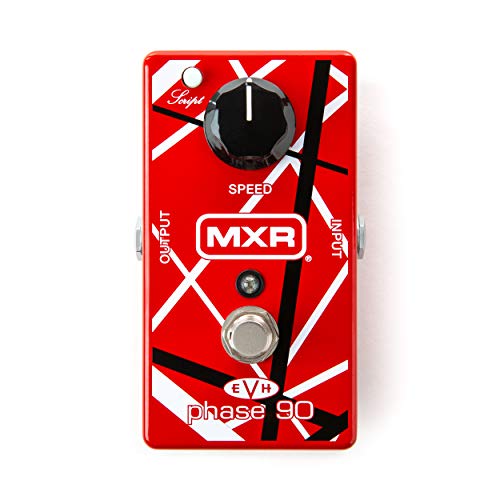 Features of the MXR EVH Phase 90: 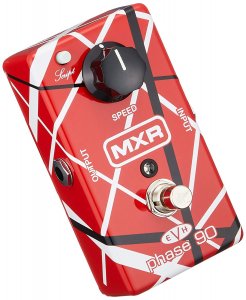 The MXR EVH Phase 90 sheds its simplistic orange looks for Eddie’s legendary Frankenstein’s guitar look. It has a red covering with white and black stripes. However, It is not an Eddie van Halen version because of only the look; it is a little more than that. It is a recreation of the famous MXR Phase 90. It is compact and carries the signature quality of MXR products – premium quality components in a durable compact body. It is 11.2 ounces and has a dimension of 5.8 x 4.5 x 2.8 inches. There is an audio jack on either side of the phaser. It has a unique feel that makes it stand out among other phase pedals.

It gives that great old Eddie sound. Back in the day, Eddie used the old script Phase 90 MXR pedal. When asked to recreate this pedal, it sounded different from the original version. This new sound is called the block logo. The new phase pedal can produce both sounds, the old and the new from the touch of a button.

The variant voicings give you the power to toggle between good old sounds and a bold modern sound. The MXR EVH Phase 90 adds an excellent amount of effects to your notes without overshadowing or distorting the sound. In this way, the notes you play will sound clear and sharp.

The MXR EVH Phase 90 comes with minimalist controls. It has an on and off switch and a speed control knob. There is a sound toggle between the script and block logos and a blue led light you can see on any stage however bright or dark it may be. This makes it easy to use and set up. With minimal control buttons come less versatility and more sturdiness. In its defence, the EVH90 is built to sound like Eddie Haden and that is what it does.

To get the Eddie sound, you push the script button and set the knob to 9 O’clock, we’re assuming you are using an analog clock. That will give you the van Halen sound you hear in most of his solos in the first album.

This beast can be powered by an adaptor or a single 9a battery.

You can experience the same immersive trance-inducing sound that made the phase 90 famous. This stompbox has all the features the legendary Eddie Van Halen will want and more. It is a melting pot of sound, quality and the experience of a legendary guitarist to produce a spectacular piece.