As a beginner or experienced pianist, you can never go wrong with a piano from the stables of Yamaha. The Yamaha Arius YDP 162 is a popular choice among learners and hobbyist. Years of experience are evident in the Yamaha YDP 162 and you will get your money’s worth with the features packed in this piece. The advanced technology used in the production of this piece produces high-quality sound and an acoustic feel. It possesses impressive features for all skill levels. 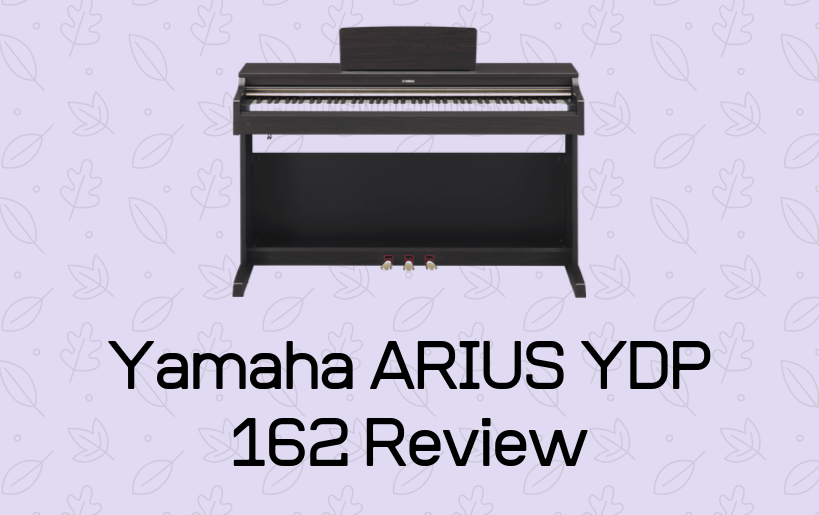 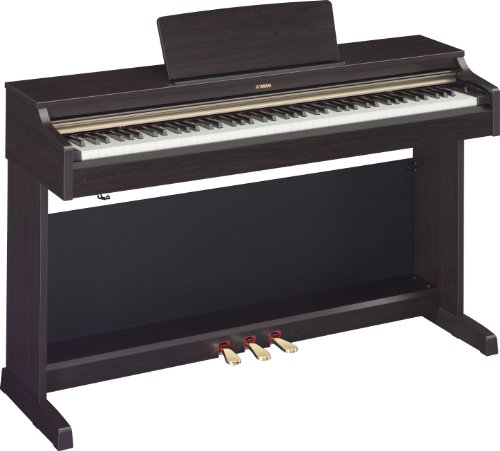 Features of the Yamaha YDP 162:

The Yamaha Arius YDP 162 is packed with the right amount of features to give you a great learning experience, which makes it one of the best digital keyboards.

The Yamaha Arius YDP 162 gives the same feel like a real piano with the 88 keys keyboard. The graded hammer (GH) keys come with a weighted action that is heavy on the low end and lighter in the high end. The keys come with different settings and can be tuned. This means you can select a setting of either soft, medium or hard to suit your desired finger strength while playing. According to piano teachers, weighted keys are important in the development of muscle memory in the fingers for learners.

The weighted keys feature produces great sound and a high-quality pitch by allowing key stability, repetition and response. The keys are made with synthetic ivory which feels like a real piano and allows your fingers to stay on tightly.

Yamaha had the student in mind while creating this piece. The duo feature splits the piano into two halves, allowing the student to repeat everything the teacher does and learn faster.

The YDP 162 tops other pianos in the Arius series like the 140 and 162 by standing at a height of 33 inches. This encourages good posture and allows you to sit comfortably and play for longer periods.

The Pure CF sound engine is an exquisite sampling of Yamaha’s concert grand making the instrument sound realistic and rich. The 20 words per channel deliver the sampled sound of a CFIII concert grand with incredible clarity and power.

There is an acoustic optimizer which adjusts acoustic flow in real-time giving you a great experience as you practice with your piano. The acoustic optimizer is a new technology from Yamaha which uses a special design and position in the instrument to control and enrich the sound produced.

The metronome and the transpose features help you stay on beat. There a is 128-note polyphony which provides enough fuel for a drop-out free performance. This can be layered and played with both hands with sustained chords and intense pedaling.

Then there is the reverb which handles the many different sounds and voices and ensures the system does not get overloaded.

The YDP 162 has a 20 Watts speaker, better than what is found in most digital pianos in this series. The 20 Watts speaker produces a richness in sound like a concert piano that can fill an average-sized room in your house. The speakers will help you enjoy each play session and make you hunger for the next.

The importance of a headphone port in the practice piano cannot be overemphasized or diminished. You can practice at your pace without causing a distraction to other people in the room and hear how good or bad you sound without getting dismissive comments. In the case of the YDP 162, it comes with a dual headphone port which can be split along with the keyboard to aid teaching. A headphone resting place is also provided so you don’t misplace it.

The Yamaha 162 is beautifully styled and available in dark rosewood, black walnut, light cherry and polished ebony finishing. This means you don’t have to worry about your piano not fitting in with your home décor.

A Collection of Voices

There are 10 different voices in addition to the grand piano. There are electric pianos, harpsichord, and pipe organ. Any two voices can be played together simultaneously. The grand piano can be mixed with multiple organs, the harpsichord, strings and a vibraphone. Although 10 voices might not seem like a lot, Yamaha focused on the quality to give you a full and exciting experience.

There are three standard piano pedals to give you control and sustenance over the sound. The pedals offer the feel of a great half-pedal and digitized pedal which is not often created for a digital piano and allows for great expression. This lets you sustain the beat and stay on key throughout the session.

Auto on and off Feature

In keeping with Yamaha’s corporate social responsibility and a desire to save energy, the YDP 162 shuts down after a period of inactivity. You can customize the duration of inactivity before the instrument shuts down.

It wouldn’t be a Yamaha digital piano without connectivity features. The YDP 162 has a USB and MIDI connectivity that can be connected to a computer. You can record into digital software and manipulate virtual instruments with ease.

50 Greats for the Piano

Yamaha provides 50 classic piano songs in a song memory and an accompanying ’50 Greats for the Piano songbook’. You can play these songs and follow the songbook. You can practice these songs with one hand or just enjoy the classics of great pianists that came before you. As a beginner, this will be an invaluable accessory on your journey to learn the piano and a refresher for professionals and experts.

Although it doesn’t have the bells and whistles, the Yamaha Arius YDP 162 offers well-selected features you will find very useful. Yamaha dots the Is and crosses the Ts to give you an instrument that stays true to its words. It is a stylishly designed instrument that will fit perfectly into your home décor. It also looks similar to the classic piano and a great choice for those with a traditional appeal. You can sleep easy knowing that you will be getting a great Yamaha product when you opt for a modern digital piece. If you are serious about playing the piano, it is time to move up to the YDP 162.