Are you looking for an advanced digital piano now, as your skills have improved significantly? If that’s the case, then you want to read this Yamaha MOXF8 Review till the end.

See, we piano enthusiast always wanted to get our hand on Yahama pianos, before we even knew how to play the piano. That’s because we have seen our favourite musicians give their best performances with this brand instruments. But as we were starting out, either we couldn’t afford them, or we were told they are not for the beginners.

However, as we get better, we should advance our instruments, and that’s not thriftiness but instead spending our money on things we love. Moreover, this piano from the house of Yamaha is expensive, but is it worth considering for the advance players? 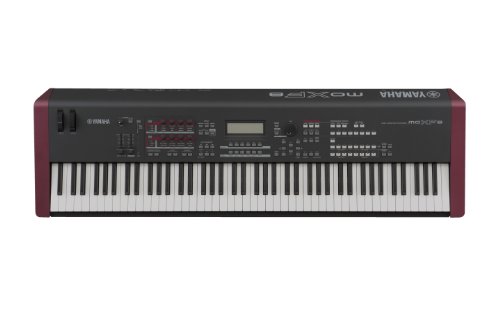 The Yamaha MOXF8 belongs to the series “Yamaha MO” which was launched a few years ago as an affordable version of the legendry Motif ES. Therefore, they haven’t changed the UI or the overall functioning much. So, if you do want to move on from this to a more advanced Yamaha keyboard, you wouldn’t feel much of a difference. 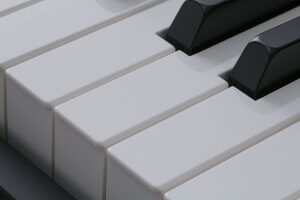 The Yamaha MOXF8 features 88 fully weighted and touch sensitive keys. It has been designed so ingeniously that a lot of unwanted space has been avoided and kept the overall body short enough to be carried around. This has been achieved by putting the pitch-bend and modulation wheels on the front panel rather than beside the keys.

Some expert players do complain that this shuffling affects their performance, but it’s only a matter of practice and getting used to it. Moreover, saving the space and keeping the size as small as possible is worth it.

This lightweight nature makes carrying the MOXF8 quite easier, but this also increases the risk of more significant damage from falls. So, keep it in a robust and well-compacted bag.

It features the entire factory ROM sound set of the Motif XF including some other sounds. Moreover, you can pile up to 8 eight parts with independent insert effects for each, owing to the eight-way VCM as well as the 128-voice polyphony.

Although the MOXF8 does not feature user sampling, it can, however, playback audio samples that are loaded from a USB to an optional Flash memory board. The MOXF8 features one flash slot that supports up to 512mb of total memory. You can change this wave data on these flash memory cards whenever you want.

This Yamaha MOXF8 tagline stands true to its word. You’ll find up to 8,000 unique arpeggios starting from the early blues, going through 80s rock and 90s hip-hop all the way up to the latest EDM and acoustic-driven sounds. This leaves you with so many patterns to discover and use in unique variations throughout your jams. The sound quality is superb and hardly varies from that of a concert-level piano.

You can fill your recordings into its 16-track sequencer while staying connected to your computer. The MOXF8 also features knobs and buttons that like a DAW controller can sync with different music creation software.

Speaking of music creation software, you can use software like digital Performer or logic. However, since Steinberg is Yamaha’s proprietary software, we recommend you to use Cubase AI, as it provides more quality than the rest of them.

For those of you who do not know What KARMA is and what can be done with it, just know that it stands for Kay Algorithmic Realtime Music Architecture and that it takes integration with computers to whole another level.

KARMA initially only supported Korg keyboards but gradually started supporting other high-end keyboards. Therefore, it’s mind-blowing to see MOXF8 support it. If you do happen to buy Yamaha MOXF8, you must also get KARMA for it. It costs $199 but it will make give you a lot of freedom than you can have with just the basic integration of the Yamaha MOX.

In short, you’ll miss out on so much if you don’t get it. 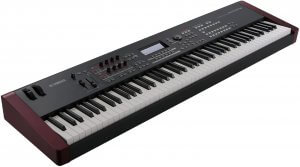 A beginner will find this many buttons and nobs quite overwhelming. However, the thing worth noting here is that this piano is not for beginners. If you are advancing in your skill, you’ll have to get used to this. With the help of a good teacher and hours of daily practice, you’ll be proficient in no time. You can also use the category and favorite functions to avoid a lot of hassle.

Pros and Cons Of Yamaha MOXF8:

Now that we have explained every bit of feature in this Yamaha MOXF8 review, we’ll boil it down to the simple points, so you don’t get overwhelmed.

Although you can clearly see that the cons are not really worth considering as cons, but we included them so that we don’t get bombarded by anyone later on. Even then, you can see that is the pros outweigh the cons heavily. Therefore, it’s worth paying the price for.

The only people we would not recommend this to would be those that are just starting out or haven’t skilled past the beginner’s phase. This is because the interface and more so its plethora of buttons and knobs can be overwhelming for beginners. On the other hand, for advanced players, this would be a child’s play.

We hope this Yamaha MOXF8 review was helpful for you and if you have some queries unanswered, let us know in the comment box below.