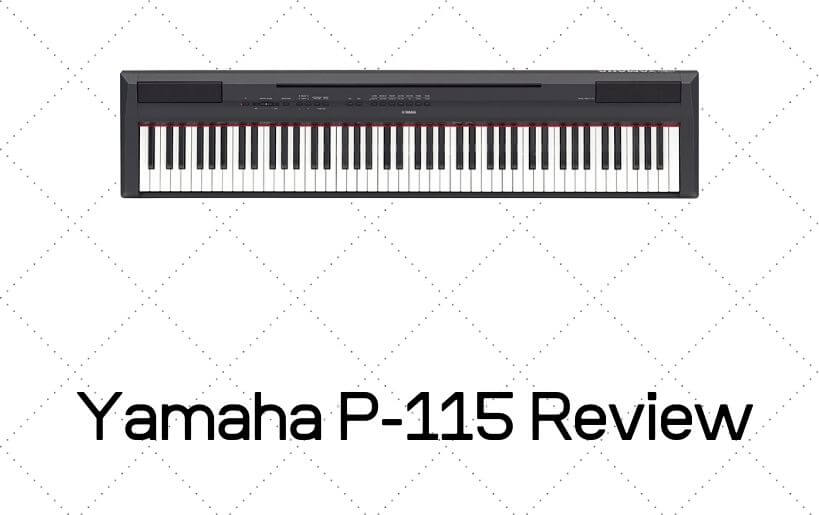 The thing about mid-ranged musical instruments is that they have to strike a very good balance of attributes they will pack, and the functions/features they decide to leave out due to pricing or positioning. The value proposition must make sense for the end-user as the company has compromised on some features and the buyer must decide if they can make do without those omissions, or if the omissions will be a deal-breaker for them.

This Yamaha P-115 review, we will go through factors, qualities, and shortcomings that need to be considered before deciding on the purchase of this instrument, which is the successor to the Yamaha P-105, and a step behind the P-255.

We will be exploring its features, its aesthetics and build, sound, features, and summarized pros and cons list to help you get to know this instrument better.

The “P” in the Yamaha P series stands for portable, and that is the theme that the P-115 follows as well. Gigging/touring musicians are set to benefit from this lightweight ye feature-rich instrument, as moving it is not that much of a hassle.

Other options that you might want to consider if you are in the market for a similar piano would be Yamaha P-105 and P-255, which offer functionality and features in varying diversity as compared to the P-115 that lies in the middle.

The P-115 does not scream “premium” and neither was it build to do so, but it does look sleek, elegant, compact, and to the point. It comes in black and white color variants.

Its dimensions are 52.6 inches by 11.6 inches by 6.4 inches, and it weight 26 lbs. (11 kg.). It can easily fit on a conventional piano stand, as well as on a computer desk. Its build is sturdy and durable, and it can surely take a beating out on the road or from players with an aggressive playing style.

The control panel has 14 buttons dedicated to operating different functions, voicings, and features. There is no LCD, which might be something Yamaha would want to integrate into the later models.

The keys do not feel premium either, as unlike the P-255, the P-115 does not have synthetic ivory/ebony keys. However, the plastic keys on it do not feel cheap. The white keys have a glossy finish, whereas the black keys have a matte finish allowing players to have long sessions without problems.

For a mid-range digital piano, the modeling and replication of the “acoustic” piano are great. Recording-worthy sound quality and clarity are salient features of this instrument.

The default sound of the P-115 is that of a grand piano, which is based on the legendary Yamaha CF-IIIs nine-foot concert grand piano. It can safely be said that for a digital piano, it manages to mimic the sound accurately, using the “Pre CF engine” sampling. It might be worth noting that the same engine has been used in the more advanced P-255.

The P-115 has a 192-note polyphony which is high for this price range. Polyphony count in digital pianos has a direct correlation with the quality and authenticity of the replicated acoustic piano sound.

There are 17 types of sounds in the p-115; 3 electric piano, 3 grand/acoustic pianos, a jazz organ, a pipe organ, a rock organ, a vibraphone, strings, harpsichord, wood bass, and electric bass. There are 50 tracks that have been recorded into the piano for learning, practice, and playback reference.

There is also a “sound boost” feature which helps the piano sound cut through the mix when it is a part of an ensemble. There are four types of built-in reverb effects in the P-115, namely concert hall reverb, recital hall reverb, chamber reverb, and club reverb.

The P-115 has touch-sensitive keys, which means that the dynamic range is quite expansive. The volume can be adjusted depending on how strongly the keystrokes on this instrument are made.

It also houses Yamaha’s proprietary Graded Hammer Technology, which is leveraged to make the lower notes on the piano heavier, and the higher notes lighter to mimic a real piano. This proves to helpful for building technique that is also suited to a real piano, as well as giving the players a realistic playing experience.

The P-115 has built-in 2x 12cm and 2x 4cm true-circle speakers with 7W + 7W amplifiers. They have clear sound with balanced, punchy, and dynamic frequencies that suit indoor performances and practice, alike.

A compatible sustain pedal comes with the piano. It also houses 2 headphone jacks, so that sound can directly be projected to the ears in those late nighttime hours.

MIDI/USB connectivity is also there for transferring songs to the computer and enabling smooth recording for subsequent mixing and mastering. A 2-track recorder is also integrated within the P-115.

It can safely be said that the Yamaha P-115 is a great piano for beginners and intermediate players. For people looking to get their hands dirty with hours of practice, good functionality, and realistic sound, this piano is the one to choose.

However, for a professional musician who tours frequently and is looking to add all the bells and whistles of a modern digital piano to their arsenal, the Yamaha P-255 would be a better choice.

In the context of the pianos in the P series, the P-115 is possibly the most desirable one as it strikes just the right balance for it to be suitable for beginner, as well as intermediate players who gig occasionally and want to further their skill with an instrument that sounds realistic and one does not have to break the bank for it, either.